As a theory teacher, it is rare that I get to sit and enjoy an entire song cycle. I hear them in single songs, bits and pieces, used only to reflect the music theory topic du jour. So it is quite the experience to listen to an entire story from beginning to end. 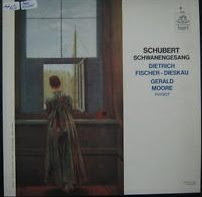 Today's Nash Library Vinyl is Dietrich Fischer-Dieskau singing Schubert's Schwanengesang (swansong). This song cycle contains 14 songs. Through the performance of the songs, the following story emerges (basically): Man loves woman who breaks his heart. Man flees town where he and his love interest live. Man feels wretched. Man tries to persuade a fisher maiden to make love to him. Man returns back to town and is still miserable and alone. Man sings about a carrier pigeon.

The fourth song, Ständchen (serenade), is part of the undergraduate vocalist ouevre and was also turned into a piano solo. But my favorite song is Der Doppelgänger (the double). This is the song sung when the man returns back to the town where he and his love lived. This piece is used in undergraduate theory as an excellent example of the Neapolitan harmony. But I can't help myself. I want to scream from the rooftops how amazing this song is to my students so we have to review and analyze the text and listen to the whole thing. I don't care that the Neapolitan harmony can be pointed out in 10 seconds. WE HAVE TO LISTEN TO THE WHOLE THING!

The translation of the text is (thanks, lieder.net!):

"The night is calm, the avenues are quiet,
My sweet one lived in this house;
She has already left the city long ago,
The house certainly still stands, in the same place.

A man is standing there, too, staring up into space,
And powerfully wringing his hands in torment.
It horrifies me, when I see his countenance,
The moon shows me my own form.

You my fearful double, you pale partner!
Why do you ape the pain of my love,
That has tortured me here in this spot
So many a night, in times long ago?"

The song is laboriously slow, with a tempo indication of "sehr langsam" (very slow) and a piano accompaniment of slow, rhythmically stagnant chords. You can easily picture the sickly man, stalking by his ex's house, shoulders drooping, and hands almost dragging to the ground. The singer hovers on a single pitch for much of the beginning, as the man cautiously enters the house. As the music and story unfold we realize that the doppleganger is not another person in his love's old house- the narrator is simply seeing a reflection of himself.  I only use Fischer-Dieskau's recording when I teach this song to my students- his deep mellow voice and his haunting interpretation of the piece are unparalleled.  Go listen to it! Go listen to it now!
Posted by Dr. Kate Sekula at 5:33 PM No comments:

Add some Janáček to you life!

There is just not enough Janáček in our lives. On the turntable today is Leoš Janáček's Slavonic Mass. 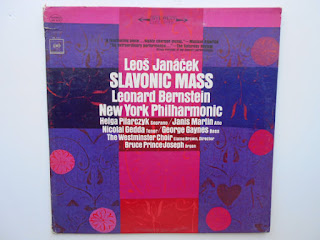 Janáček (1854-1928) was Czechoslovakian. He was the son of a Moravian schoolmaster and organist. He founded and was the first director of the Brno Organ School. It took him 30 years to really get rolling with his composition, but eventually he developed a unique style, incorporating Moravian folksong, and pitch inflections and rhythms of his native language (and bird songs, dog growls, wild animal cries, rustling leaves...). He was best known for his operas and organ music. Because of my background, I am more familiar with his string music so I thought this would be a nice change of pace.

The Slavonic Mass involves choir, soloists, orchestra, and organ. His style is deeply unique and "hard to explain." While his harmonies are quite usual his rhythms and melodies are short, angular, and striking. The use of speech and language pitches and rhythms makes his music immediately strange but familiar.

Janáček exuded Nationalism and, like Beethoven, his mass was never meant for the church. The notes from the vinyl jacket read: "The Slavonic Mass, for all its flaming ardor, was not intended to be a religious work, but a national one. 'I wanted to portray the faith on the certainty of the nation, not on a religious basis but on a basis of moral strength which takes God for witness'...The Mass is based upon the text of the ancient Glagolitic rite, brought to Moravia in the ninth century by the Saints Cyril and Methodius, and extinct in the churches of that country since the fifteenth century." 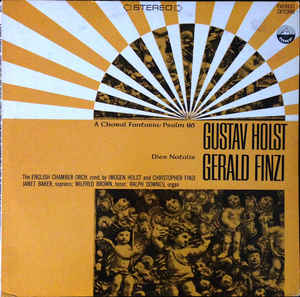 Today's Nash Library Vinyl contains three works by Gustav Holst: "A Choral Fantasia," "Psalm 86" and "Dies Natalis." While "A Choral Fantasia" and "Dies Natalis" are lovely, I will focus on "Psalm 86." This absolutely transported me. I hadn't heard it before and the tonal colors of the choir made me stop what I was doing and just...listen... I realized that the harmonies, especially in the middle section, reminded me very much of those in Rachmaninoff's "Bogoroditse Devo," a piece I have performed several times, most recently in the soprano section of the USAO Concert Choir.

Imogen Holst, the daughter of Gustav Holst, wrote the notes on the back of the album and also directed the works on the album along with Gerald Finzi. "Psalm 86" is written for chorus, string orchestra, and organ. It was written in 1912 and is based on a hymn-tune first heard from the Genevan Psalter of 1543. Imogen writes: "There are beautifully expressive passages for the strings: the solo tenor's chanting has the freedom of plainsong, and the unaccompanied sopranos and altos join him at the end of each line of his prayer, gathering his words together and lifting them into the measured serenity of their harmonies." I couldn't have said it better.

To my humble supplication
Lord, give ear and acceptation;
Save Thy servant that hath none
Help nor hope but Thee alone.

Send, O send relieving gladness
To my soul opprest with sadness,
Which from clog of earth set free
Winged with zeal, flies up to Thee.

To Thee, rich in mercies treasure,
And in goodness without measure,
Never failing help to those
Who on Thy sure help repose.

Heav'nly Tutor, of thy kindness,
Teach my dullness, guide my blindness,
That my steps Thy paths may tread
Which to endless bliss do lead.
Posted by Dr. Kate Sekula at 11:58 AM No comments:

It's been a little while since I posted. I have to be honest that I've gotten stuck on listening to my own copy of the Dave Brubeck Quartet's album "Time Out." I also had a series of disappointments when it came to my Nash Library Vinyl experience. 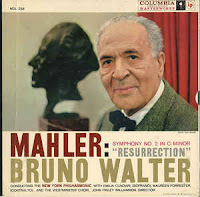 A Mahler symphony is to be revered. You need to set aside special time to listen to it. Do not make any other plans. Just play the Mahler symphony and sit in the dark and question your life choices.

It was difficult to carve out a block of time, but when I did my Mahler experience was ruined. One word: piccolo. The piccolo player on this recording is abhorrently out of tune. 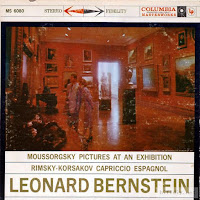 Two of my most favorite pieces in the whole world! I have fond memories of performing both of these works at George Mason University under the direction of Anthony Maiello. I tend to love Bernstein's tempos; they are always a bit faster than logically possibly. This recording was not bad, but it was not as vibrant as I want my Russian composers to sound. 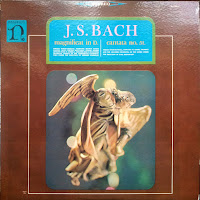 This recording was lovely! But just prior to the final cadence of the Magnificat there is a skip in the record. You are left in a perceptual realm of unresolved harmony. No amount of cajoling the needle will get this to jump to the final chord. I am still an incomplete human. 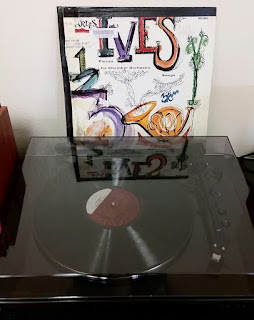 From an early age, Charles Ives learned about musical experimentation from his father, George Ives, who was the bandmaster in Danbury, CT. His father often experimented with sound and included Charles in his experiments. For instance, his father would ask him to sing a song in one key while it was being played in a different key on the piano. A fun interactive website that demonstrates some of George Ives' musical experimentation can be found here.

Charles took the musical experiences of his childhood and incorporated them into his own compositions, creating a unique (albeit oft-considered strange) musical voice. He worked predominantly as an insurance salesman and composed on the side. His efforts won him the Pulitzer Prize for music in 1947.

This album features works that are far less familiar than pieces such as "Three Places in New England," his "Variations on America" for organ, or "The Unanswered Question." It includes performances of smaller chamber works, songs for voice, and a piano sonata.  I recommend this album for when you need to feel highly uncomfortable. 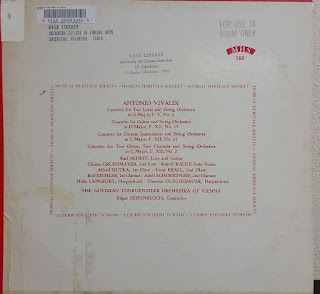 The concerto grosso for two lutes is brilliant. Since most of the music on the album is in the major mode, it is a welcome, and spirited way to begin the day or to enjoy with a learned cup of tea in the afternoon.

One interesting fact is that the Concerto grosso that features two oboes and two clarinets would have been one of the first pieces ever composed that specifically called for use of the clarinet in a solo and virtuoso manner. Other composers at the time were still unwilling to accept it. 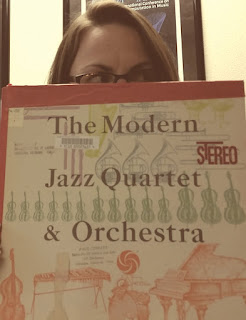 September 30, 2016. Today's @NashLibrary vinyl is by The Modern Jazz Quartet & Orchestra (Atlantic Records, 1961). I love that the front of this album emphatically declares that it's in STEREO.

The original members of The Modern Jazz Quartet (MJQ) first performed together as part of Dizzy Gillespie's big band in 1946. The group went through various membership iterations, but the longest-standing membership included John Lewis on piano, Milt Jackson on vibraphone, Connie Kay on drums, and Percy Heath on bass.

The works on this recording are the result of third-stream composition, that is, a composition that synthesizes the essential techniques and characteristics of contemporary Western art music and other musical traditions. In this case, "classical" music is fused with jazz. The first person to coin the term "third-stream" was the composer, conductor, and writer Gunther Schuller during a lecture at Brandeis University in 1957. One of Schuller's works, the "Concertino for Jazz Quartet & Orchestra," is performed on the B side of the album. Schuller also conducted several of the works on the album.

One of the oddest arrangements is "England's Carol" by John Lewis. It is a combination of jazz and classical orchestra for an arrangement of the tune that most of us know as "God Rest Ye Merry Gentlemen."

As a flute player, the third-stream example that instantly comes to mind is Claude Bolling's "Suite for Jazz Piano Trio". Guess what? Nash Library has vinyl of that piece too!

Dr. Kate Sekula
Since earning her Ph.D. in music theory and history from the University of Connecticut in 2014, Dr. Sekula has been a full-time faculty member with the department of music at USAO where she teaches the music theory curriculum and conducts the concert band. Sekula also serves as the coordinator for the department of music. She has previously earned Bachelor’s degrees in music education and flute performance from Lebanon Valley College and a Master’s of Music in flute performance from George Mason University. Sekula has studied flute with Barbara Divine, Dr. Theresa Bowers, Judith Lapple, and Dr. Barbara Hopkins.